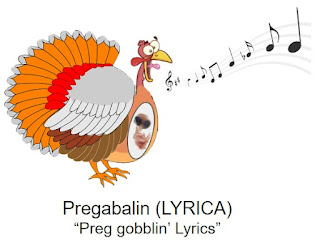 Check out the Black Friday sale on Cafer's Psychopharmacology: Visualize to Memorize 270 Medication Mascots. For a limited time, the paperback is $49.95 and the PDF version is $29.95 (regular price $89.95). The PDF is formatted for ultra-rapid navigation with thousands of internal links. Included are medication mascots to assist you with memorization of trade name / generic name pairings. Here are excerpts from from 5-star Amazon reviews: ★★★★★ Love it I barely look at the pictures, honestly. I'm most impressed by the way the author explains everything through text, simply and efficiently. ★★★★★ GREAT PSYCH NO STUDENT EASY TO READ RESOURCE This breaks things down easily and is a great study resource for those needing something more concise and easier to read. ★★★★★ THIS BOOK helped me SO MUCH! First of all, I don’t write reviews but this book deserves it. I am in a CMHC graduate program where a class asked me to know most of the antipsychotics and antidepressants. It was
Post a Comment
Read more 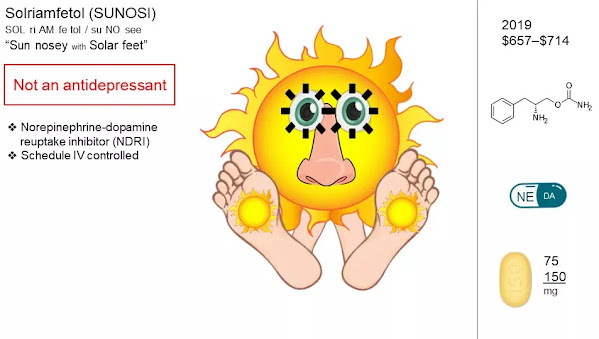 From Cafer's Psychopharmacology: Visualize to Memorize 270 Medication Mascots Solriamfetol (SUNOSI)   Solriamfetol (Sunosi) is a new wakefulness promoting medication that lasts for 9 hours. It is stimulating but not considered a “stimulant”. It is a norepinephrine and weak dopamine reuptake inhibitor. Sunosi could be conceptualized as an atypical antidepressant with a mechanism similar bupropion (Wellbutrin). However, solriamfetol is not approved for depression, and clinical trials did not include psychiatric patients. About 1 in 25 subjects treated for narcolepsy/sleep apnea had psychiatric side effects such as irritability and anxiety. Solriamfetol is a Schedule IV controlled substance. By comparison, bupropion is non-controlled but does have potential for abuse at high doses. Subjects who abused drugs reported “drug liking” similar to the appetite-suppressing stimulant phentermine (Adipex) when solriamfetol was taken at supratherapeutic dose. Phentermine is also Schedule IV.
Post a Comment
Read more 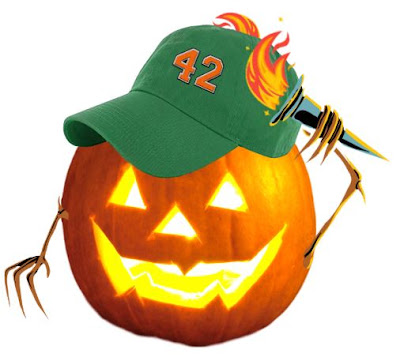 Available on Amazon:  Cafer's Mood Stabilizers and Antiepileptic Drugs Lumateperone (CAPLYTA) Pronunciation: luma TEP er ohn / cap LIE ta  “’Lum inated Cap lighter” Antipsychotics are represented  with spooky mascots. Year of US release: 2020 ❖ Antipsychotic (SGA) ❖ D2 antagonist - ⇩DA ❖ 5-HT2A antagonist - ⇧DA ❖ Glutamate modulator FDA-approved for:  ❖ Schizophrenia Lumateperone is a new antipsychotic that purportedly modulates glutamate in addition to the usual SGA mechanism of blocking D2 and 5-HT2A receptors. However, the official prescribing information does not mention glutamate, suggesting the FDA saw insufficient evidence for lumateperone being a first-in-class novel antipsychotic. It appears to be equally effective as risperidone (Risperdal) with fewer side effects other than sedation (Citrome, 2016). Lumateperone’s D2 receptor occupancy is lower than most other antipsychotics. This means extrapyramidal side effects are unlikely. The other antipsychotics with
Post a Comment
Read more
More posts